In 2014 the Brazilian economy sank, with GDP growth of close to zero, but the number of mergers and acquisitions in the country was high. According to research from KPMG, there were 818 transactions in the period, 22 more than the total for 2013. A survey of PwC points to 879 contracts signed, with an 8% growth over the previous year. The current situation tends to cool the overall business this year, but operations in the segment will maintain a significant volume, slightly lower than the previous period.

“The expectation is that the number of transactions to decrease slightly in 2015 for the increased risk of investing in Brazil, but will not be a serious concession such as that occurred in the wake of the 2008 crisis,” says Luis Motta, a partner at KPMG. He believes that, as the seventh economy in the world, Brazil has many areas with room for consolidation. Another explanation for the apparent mismatch between the economic situation of the country and the relative dynamism of the sector is the size of the Brazilian market, a permanent attraction for groups with long-term plans.

Gustavo Sardinha, a partner at B2L Investments, the current situation favors the strategy of companies interested in merger or acquisition to reduce costs and maintain market share. In some cases, such as in real estate, you can benefit from a period in which the assets will be depreciated for having greater supply in the market. “The crisis can also become an opportunity to buy smaller companies for more structured companies,” he says. Businesses tend, however, to have little immediate impact on the economy, because it does not relate to a short-term expansion plan. “These partnerships often do not result in increased production capacity, but in plant modernization, rationalization costs and may initially reduce the number of employees,” adds Luis Afonso Lima, president of the Brazilian Society of Transnational Corporations and Economic Globalization.
The scandals that reach the largest construction companies in the country may represent, in evaluating Sardinha, another opportunity for acquisitions in 2015. He cites the attempt to sell the OAS Invepar, has the concession of Guarulhos Airport, in São Paulo, and two stadiums built for the World Cup, the negotiation by UTC on their part in granting Viracopos Airport in Campinas, and the difficulty of Engevix to maintain holdings in airports of Natal and Brasilia. “The construction industry and oil and gas must be pretty shaken by the investigations and there tend to be a re-accommodation with the entry of new market entrants and other consolidation process,” says the lawyer. Other industry professionals confirm the stable trend in the volume of operations in recent years, under the impact of recession outlook and the uncertainties on the political scene. 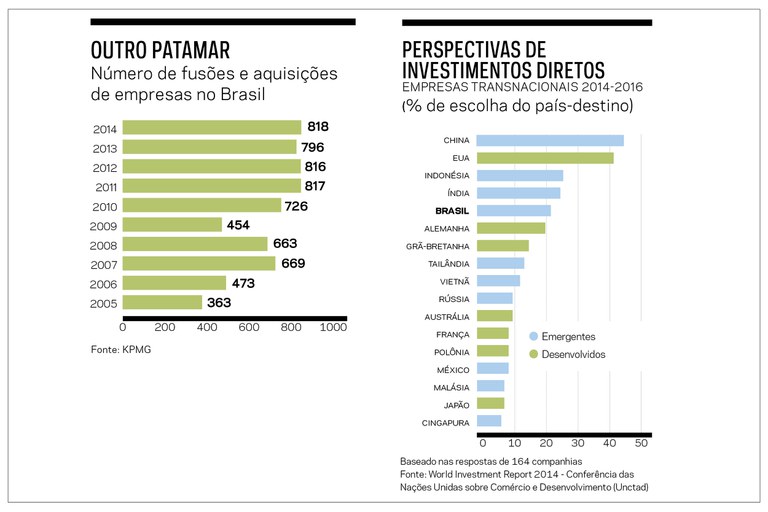 The busiest sectors for transactions in 2014 were the energy, food, beverages and tobacco, information technology and Internet companies. According to the Brazilian Association of Financial and Capital Market, the value of mergers ads and acquisitions, public offerings of share acquisitions and corporate restructurings, reached 193 billion reais in 2014, the highest in six years, driven by a large concentration of operations in the period. The top ten 2014 business accounted for 62.5% of the total, mainly for the purchase of GVT by Telefónica, for 23.5 billion reais, approved by the Administrative Council for Economic Defense (Cade) in February this year.
One segment with great potential for consolidation and opportunities for mergers and acquisitions is the education, weighing operations in recent years. The two main examples are the merger of Anhanguera with Kroton, the two largest educational companies publicly traded in Brazil, valued at 5 billion reais approved by Cade in May 2014 and the purchase of the Universidade São Judas Tadeu by Anima , by 320 million, approved in June. “In information technology there is also a very strong movement of purchase as well as in the food sector. But all areas suffer consumption reduction perspective, “says Motta, KPMG. And Internet groups recorded the highest number of mergers and acquisitions in Brazil in 2014. There were 123 transactions in 91 IT and internet, many with small companies.

The decision to buy or join another company’s main objectives are increasing market share, the diversification of the company’s operations or the incorporation of a supplier. In the case of Union Bank of Brazil with Cielo for the creation of a joint venture dedicated to the management of credit and debit cards approved by Cade in December 2014, the company aimed to diversify the activities of the operator and reduce structure costs from the bank. The acquisition of distributor Latin fuels by Raizen (a joint venture between Cosan and Shell) in April last year, had as its goal to expand the presence of the products of Shell in southern Brazil. The investment portfolios of the Growth Acceleration Program, Petrobras and sporting events played an important role in attracting investors to participation in operations.

With the Brazilian domestic demand accommodated because of inflationary pressures and the possibility of reduced income, evaluates Lima, the investor starts to study the future export capacity before settling in the country. In order to attract more investors, regardless of the crisis period, Brazil needs to focus on a less complex taxation, the qualification of the workforce and investments in logistics infrastructure, says Eric Waidergorn, director of Ewaider Moreira. A survey of the consultancy found that the country has one of the lowest tax rates in the world capital gain of 14.5%, against 28.6% in the average of G7 countries. But the important attraction is partly offset by the cost of internal taxes.
Foreign capital had significant weight in M ​​& A transactions in 2014, with 399 transactions, or 47% of the total, according to KPMG, while in 2013 this share was 40%. According to the United Nations Conference on Trade and Development, Brazil should continue to be the fifth largest direct investment destination for multinational companies by 2016. In 2014, it received 62 billion dollars, an amount that brings together the funds invested by investors shares representing 10% or more of the capital of a company. The level is constant since 2011.

The loans made by foreign headquarters to its subsidiaries in Brazil are not necessarily reversed in investments. “In recent years, the foreign direct investment level remained, but there is an increase in the share of domestic loans of transnational companies, historically 13%, but today at around 35%,” says Lima.