Latest Conflicts Caused a Stir to The World

The Amazon Rainforest burnings that caused so much critical remarks on Jair Bolsonaro’s decisions regarding his environmental policies; also seemed to make another type of conflict stand-out. Indigenous leaders and spokesmen for tribes in Amazon have been in conflict with gunmen that opened fire on a group of people in the first days of December. The latest disputes are surfacing an old problem has been occurring for centuries in Brazil.

Many raw material that are found in tropical forests can be sold to industries for profit and manufacturing. During the latest Governments in Brazil, indigenous lands had their limit defined and some form of political protection. Ever since the colonization process in the Country, the conflict between indigenous people and commercial exploiters; that are interested in the natural resources for profit, has been occurring.

This is not about culture

It is clear that a civilization process that took place in Europe an then came to Brazil on ships during the 1500s made two world views collide. And in a certain way it could possibly be healthy, but there were many factors that created a discrepancy between what is defined as “white man” and indigenous people nowadays in Brazil.

The crossbreeding of different ethical backgrounds in Brazil could make the problem be considered a national issue and with characteristics similar to a civil war. We became miscigenated, so we are talking about a conflict that is beyond cultural differences. In fact part of the indigenous population in Brazil consider themselves as Catholics or even evangelical Christians. 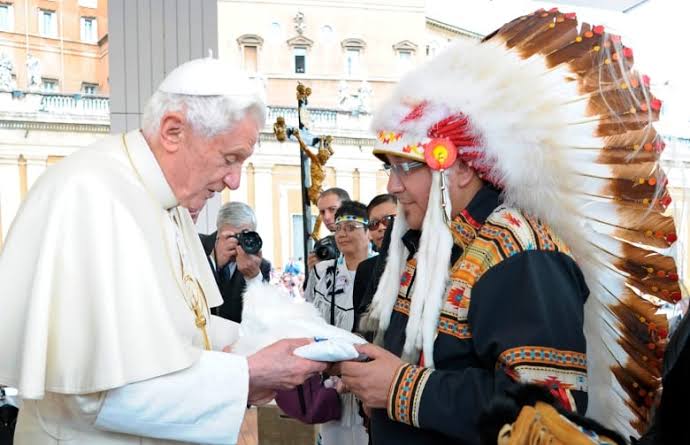 Indigenous leader with the Pope in a Catholic Ceremony.

Brazilian Economy Can Be Inclusive and Fair

Efforts are being done on all political sides of the Brazilian current Governments. The latest incident occurred during the UN International Climate Conference in Brazil. Many foreign climate activists, including the so called and self assumed “little brat” Greta Thunberg criticized Brazilian latest policies on this issue. It looks like during the Presidency of Jair Bolsonaro, the problem is escalating and many are considering that the increasing violence is actually connected tho the increase of deforestation of the Amazon and the presence of illegal miners.

Christian Poirier, the program director of Amazon Watch stated that:

The international community must not accept that any more indigenous blood be shed. It is the constitutional duty of the Brazilian government to protect indigenous territories and ensure the safety of their peoples.

Consumers must always think about procedence

There are many byproducts that are made out of wood and those products are actually consumed in civilized Countries. There are also and already initiatives to insert seals of Verification to guarantee that the supply chain is clean and legal. So, this would be one of the best ways for a consumer to also do something wherever you are in the World. Check, for example, if the production process is legal, according to climate standards and protection policies related to the most vulnerable population in the production communities.

Brazil is on the spot of the whole world after rain-forest fires and indigenous people violence that surfaced lately, but the conflict is actually an old struggle. Our way of life could also be handheld with different mind patterns of creating well-being and comfort. This could actually be very positive for the Economy, prompting entrepreneurship with a cleaner supply chain related to those natural raw products.