Pro-Trump rioters stormed the Capitol in the US screaming “USA”

But more unimaginable was that many rioters had cellphones to take pictures and also filming many moments during the situation. People who were actually on the scene during the invasion reported that it started with a bit more than 20 people getting in, putting one police officers to run. According to eyewitness Igor Bocic who writes for HuffPost he started firstly to hear a commotion and then he saw them making a stand against the police officer there. The guard didn’t try to use his weapon against them, but everyone was shocked because at that point this was not expected at all.

One protester even got to where Mike Pence was presiding minutes earlier and took photos. Still according to the same witness Igor Bocic in a video interview for Good Morning America, they:

It was reaaly a shocking moment … they were yelling ‘traidors’, ‘we want justice’, ‘this is our America’, ‘if we don’t stop this now we won’t get justice’, ‘Trump won’, … 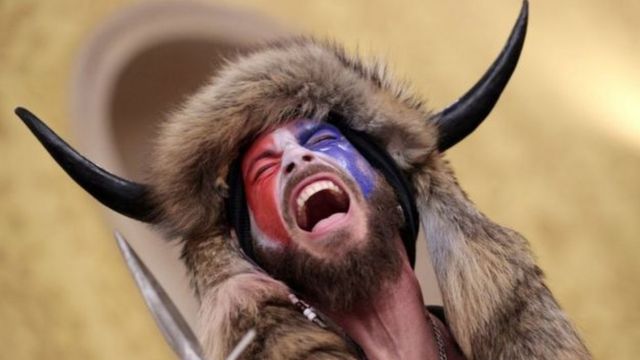 Many witnesses say that this was not the only man wearing such an outfit and it might have some links to antifeminist ideologies that were supported by Donald Trump, who was clearly against abortion.

We can’t be sure if there was really a fraud going on, such a thing has never been totally proven so far. But Trump supporters might be showing up as the largest crowd and also the most unsatisfied lately. In this topic, we will list some important facts to be considered.

Biden made a speech in Delaware about the situation

He declared that this situation in the United States with the controversies about the election must end now. People who are not happy with his election must maintain their sense of respect for the results. One thing that might be considered worthy of mentioning is that people that voted for Trump are not unhappy with the person of Joe Biden. Maybe they couldn’t care less about it, but it is the ideas that are behind things that he is defending. In opposition to what the conservative Donald Trump was doing in the United States of America that could be considered the problem.

Donald Trump continued to declare that the election was a fraud

He actually went to national television as the currently elected president of the United States demanded asking people to calm down. But dozens of people were arrested, one woman was shot dead and many media hardware and equipment were destroyed by this angry mob that was very unhappy with the results of the 2020 elections. Many are blaming Trump for declaring that the election was fraudulent and this increased the rage of his supporters.

Check a video by CNN showing the exact moment of the situation!

According to Trump, a coordination between the Democrats and Radical Left was created to remove his Twitter account from the platform. This was done to silence him in an attempt to calm down the feelings that are being generated because of this transition of power between Democrats and Republicans. The situation might not be a dispute between 2 people, but different ideologies that won’t stand together. This is the main reason that people are getting more and more unstable and aggressive, and for sure quarantines might also have something to do with it because the US is not the only country with serious riot problems right now.

In this article, we discussed some of the most commented topics related to the situation that occurred in the US Capitol. Please, don’t forget to follow us on our LinkedIn official page for more interesting topics related to Brazil and internationally. We are always checking the latest news and informing as history goes before our eyes in incredible and unexpected ways since 2020.

USA TODAY. The Backstory: ‘We are done talking.’ What we witnessed as the president of the United States incited a mob of supporters to riot. Available at: <https://www.usatoday.com/story/opinion/2021/01/08/journalists-witness-capitol-riot-trump-supporters-damage/6580244002/>.